The following content was provided courtesy of Roy Heizer, a former tour guide in Savannah. 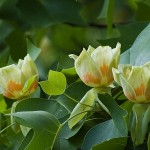 When Europeans first settled North America, they found most types of transportation (such as horses, oxen, and wagons) to be useless. Forests covered the land from the Atlantic ocean to the Mississippi River. The only truly accessible routes inland were the rivers and streams. Most waterways were difficult to explore by boat and explorers soon adopted the dugout canoe, a native American form of transportation. Many of the early dugouts were made from the trunks of the Liriodendron Tulipifera.

Carolus Linnaeus, a Swiss botanist, named this large native tree the Liriodendron Tulipifera, or as he described it, “The Lily Tree that produces Tulips.” The Lenni Lenape, a Native American tribe from Delaware, called it muxulhemenshi or the “tree from which canoes are made.” Dugouts were made from a number of trees, but the Tulip Tree was one of the quickest from which to build a watercraft.

Tulip tree wood rotted rather quickly in water, therefore these dugouts typically lasted only one or two seasons. The massive size of the Tulip Trees provided natives, then explorers and later settlers with large canoes that could haul loads and maintain buoyancy in a shallow creek . The wood was workable with only fire and hatchets.

After losing a land grant suit in 1799, a Kentucky settlement felled a tulip tree and fashioned a sixty foot dugout. Led by Daniel Boone, thirty-five people left Boonesborough, Kentucky, with their families and household goods. The women and children traveled in the hollowed out tree while the men drove the livestock overland. Once they were in St. Louis, the Spanish welcomed Daniel Boone’s group to the western territory. Boone’s group was granted land on the banks of the Missouri River and the outcasts founded the first major American settlement in the West. The Tulip Tree continued to be a source of lumber for the fledgling colony.

The Tulip part of the Liriodendron Tulipifera‘s name comes from the tulip-like flower that it produces mid-spring. Tulip trees are deciduous in that they lose their leaves in the winter. The Tulip Poplar is the state tree of both Kentucky and Tennessee.

The Red Maple is one of North Georgia’s finest hardwood deciduous trees, with a range from Southern Canada to South Florida. The Red Maple is called red due to its amazing fall color, with a palette from light yellow to deep red. It’s brilliant colors and grand size stand out for miles against a hillside forest. The Acer Rubrum is native to the Eastern United States, while other members of the Acer family are native to Central Europe.

Acer Rubrum is a magnificent tree, especially as it ages. With time, a Red Maple develops bark that is grey to brown and deeply furrowed. A massive trunk holds up stout branches which reach out and up, holding tri-pointed medium green leaves throughout the summer and displaying structural beauty in the winter. 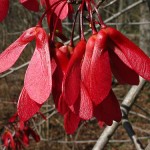 A Moldavian folk tale from the old world tells the story of a King’s young daughter, who fell in love with a shepherd after he charmed her with a Maple wood flute.

This young daughter went into the fields with her two older sisters to gather the first strawberries of the spring season. Their wretched old father thought so much more of his victuals than of his kingdom or his family, that he promised his kingdom to the first daughter who should return to him with a basket full of fruit. When the young daughter’s basket was the first one filled, it maddened the two older sisters into a jealous rage. Hence, they killed her and buried her body under a Maple tree. The two older sisters divided the berries between them and returned with the improbable story that an elk had eaten her. The King’s sadness was plain for all to see. Sad, too, were the musings of the shepherd on the hill. Blow as he might, the Maple wood flute made no sound, nor did his lady appear.

On the third day the Shepherd, passing the Maple tree beneath which his love was buried, noticed a fair new shoot that had sprung up from the ground at the base of the tree. He cut off the shoot and fashioned a new and more ornate flute, which began to sing when he put it to his lips. The new flute did not sing in wordless notes, but in prophetic lyrics. “Play, dearest! Once I was a King’s daughter; then I was a Maple shoot; now I am but a wooden flute.”