No tour along the Coastal Empire’s lowcountry would be complete without a few key stops to see these magnificent live oak trees:

The Majestic Oak is probably the largest and definitely one of the oldest trees in Savannah, believed to be over 300 years old and a witness to the Great Savannah Races of 1910 and 1911, when it hosted the Mercer Auto Camp. The Majestic Oaks neighborhood was established in this area in the early 1980s.  The Majestic Oaks Home Owners Association now owns and maintains the tree. Popular lore holds the tree may once have been a part of the Wormsloe Plantation in nearby Isle of Hope. 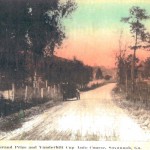 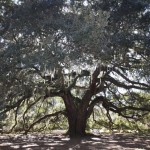 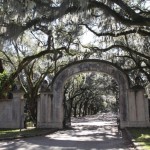 The stately avenue of oaks at Wormsloe Historic Site in the Isle of Hope once led to the colonial home of Noble Jones, one of the original settlers of the Colony of Georgia in 1733. A physician and carpenter, Jones built the historic plantation and the tabby ruins found there today. Featured most recently in the movie The Last Song, Wormsloe is as picturesque a setting of Southern gentility and hospitality as you’ll get in coastal Georgia! Be sure to stop by this state-run park for a glimpse into the past.

An often heard if but rarely seen ‘fairy’ tree, this oak lives off of Whitefield Avenue at a private residence and can be seen “by invitation only.” If you ever see it, let us know! And snap a picture for us while you’re at it — behind your back as you run away from the scene of the crime …

Coincidentally enough, the Oglethorpe Oak, Quercus oglethorpensis, is also a species of oak tree now believed to be extinct, according to the US Army Corps of Engineers. It was once found in poorly drained, seasonally wet seepage swamps and on small stream terraces in the South Carolina Piedmont.

Follow the fight to save the oak at www.savetheangeloak.org and read an inspiring article in the Charleston City Paper.

The 500 year old Middleton Oak is part of one of the oldest formal landscape gardens in the country, Middleton Place, located northwest of Charleston. The Gardens at Middleton Place were created by Henry Middleton starting in 1741, and reflect the classically grand and luxurious style of European and British formal garden traditions. The Middleton Oak is said to have been a place marker for Native American tribes and may have been trained to vault its limbs toward the ground.

Note: in 2009, the Middleton Oak lost two large limbs and may currently be in declining health. Please call Middleton Place in advance of your visit to verify its status and accessibility to visitors.

Avenue of the Oaks 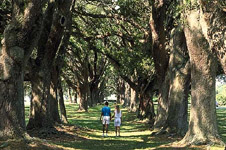 The Avenue of Oaks once served as the entrance to Retreat Plantation, an antebellum plantation on Saint Simon’s Island, Georgia, known for its superior quality sea island cotton and extensive flower gardens. It is said that Anne Page King planted this famous oak-lined pathway more than 150 years ago. The oaks now highlight the entrance to the Sea Island Golf Club. Visitors may view the oak canopies and golf course vistas by driving along the Avenue of the Oaks and circling back. (The Sea Island Club is private.)

When lovers pace timidly down through the green colonnades
Of the dim sweet woods, of the dear dark woods,
Of the heavenly woods and glades,
That run to the radiant marginal sand-beach within
The wide sea-marshes of Glynn;—

–from The Marshes of Glynn
by Sidney Lanier 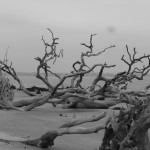 For a $6 park entry fee, you can get one of the best glimpses of how wind-beaten live oak groves grow along this peaceful, quiet & relatively undeveloped beach in Coastal Georgia. The only way you’ll ever get a better vision of how the coast once was is to visit some of the outlying coastal islands like Ossabaw or St. Catherine’s by boat – but this is the best you’ll get by car. See why Coastal Georgia truly is the feather in the crown of the Southeastern coast!

Other places to visit locally

Take a stroll down Washington Avenue to storied Daffin Park, home of playing fields, water spouts and Grayson Stadium, or visit our own Candler Oak.