Check out these great auction items.

We thank our supporters and donors for making these great items available for the October 7th Fall Frolic Live and Silent Auction.

Do you need to hire an Arborist for your trees? Please read our guide on hiring a professional to care for your landscape investment.

For Earth Day 2014, Savannah Tree Foundation was permitted exclusive right by the City of Savannah Park and Tree Department to attach signage to trees in Forsyth Park for the celebration.  STF hung over-sized “price tags” to each tree lining the main sidewalk stretching from Park Avenue to the Confederate Monument (39 in total). The 39 tags featured 9 different evaluations (based upon girth & species) and assigned an actual, accurate dollar figure to each tree’s value to natural and human habitat. The resultant effect was dramatic, almost like an alleé crossed with a supermarket aisle.

Monetizing canopy trees is a new approach for STF and this particular project required measuring each tree’s diameter and running data through iTree (the US Forest Service software tool for evaluating & assessing canopy).

Many thanks to DIRTT.net, Clark Creative, John Davis Florist and the City of Savannah Park and Tree Department for their assistance with this project.

To see the collect of 9 tree tags, click here

This holiday season, share your tree story with STF. What is your “tree story”? Are you inspired by a certain tree you walk by frequently? Did you climb one as a kid? Have a favorite shady one to sit under in the summertime?

U.S. Forest Service researchers, led by David J. Nowak, quantified carbon storage and sequestration by urban trees in the U.S. to assess the magnitude and role of urban forests in relation to climate change. Their results: U.S. urban forests sequester estimated 25.6 million tonnes of carbon every year, at a value of $2 billion. In addition, they store an estimate 643 million tonnes, at a value of $50+ billion. Read the whole article here. 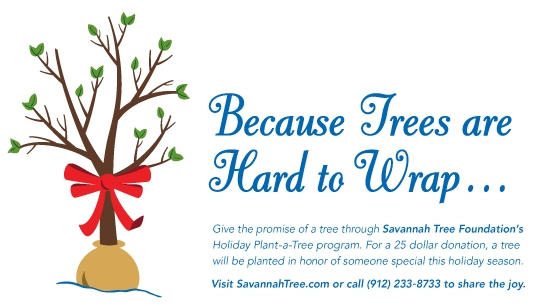 Download the order form here or click on the tree above to order Holiday trees with your credit card.

We are in a serious drought. I have not had a drop of rain at my house in 6 weeks. I know some places got an inch or 2 a few days ago. I am getting phone calls about the leaves of trees and shrubs yellowing up and then dropping. This is a survival mechanism of the plants when they are without water. If this drought continues, I am afraid we are going to see a lot of dead trees and ornamentals next spring. Weakened trees and shrubs are also susceptible to beetle and bore damage. The plants no longer have the strength to protect themselves.

Tip #1. DO NOT FERTILIZE! Many people then put down fertilizer to help the plant and this is absolutely the wrong procedure. Fertilizer forces plants to grow which means the plant needs even more water.

Tip #2. I do not have an irrigation system but I am strongly suggesting you water your trees. Hook up the water sprinkler to your garden hose. I place the garden hose about 15 feet (give or take some) away from the tree and I let it water for 4 hours in a complete circle. You need to do a deep watering. This is not the time to be worried about your water bill. Taking down a dead tree can cost way over one thousand dollars. You want to put out more than one inch of water. Remember a 100 foot tall tree will send out roots 4-5 hundred feet from the trunk. A mature oak tree will use more than a thousand gallons of water on a hot day. Water your trees right or don’t water at all.

For more information from the UGA Extension Service, visit http://www.ugaextension.com/chatham/anr/CoastalHomeownerLandscapeTurfMonthlyUpdate.html

More watering tips from Friend of Trees in Portland, OR

There are many events in Savannah to celebrate Arbor Day.
Saturday morning in Forsyth Park there will be a tree planted in honor of Mary Helen Ray.
At 9am Saturday volunteers will be mulching trees at East Broad Street Elementary School; and over the weekend professional tree climbers will be competing in Forsyth Park.

Of the dozens of different tree species in Forsyth Park, the ginkgo is Diane Houston’s favorite.

The ginkgo isn’t native, the president of the Savannah Tree Foundation concedes a little regretfully, but the tree has a showy way of dropping nearly all its yellow fan-shaped leaves en masse in late fall to create a golden carpet below it.

Last year, Houston hurried home to get her camera the December day the ginkgo let loose its leaves.

“The whole ground was covered, the park bench was covered. It was a spectacular shot,” she said.

On Tuesday, that ginkgo and the 51 other species of trees scattered around the 12 northern acres of Forsyth Park were dedicated as an arboretum. City officials have been planning the arboretum for years – many of the trees are mature and have long sported ID tags – but waited until after the restoration of the Fort and construction of the bandstand were complete to make the living museum official.

The mayor and city council members unveiled an interpretive sign that tells the common and scientific names of each of the numbered trees in the park.

Some, like the live oak and magnolia under which the sign sits, are easy to pick out. But others, like the green ash and the fringeflower, need a key for all but dedicated arborists.

The Forsyth Arboretum is unusual in several ways, said David White, who heads the city’s Park and Tree Department.

“Usually arboreta are measured in the tens to hundreds of acres,” he said. “We have 12, and it’s in an accessible downtown location. It’s part of a multi-use public park. You don’t have to pay admission to appreciate it. Anyone can come any time.”

Along with Philadelphia it was among the first of American cities to organize its tree planting efforts along streets, parks and squares. The city’s Park and Tree Commission dates to 1896, a fact evident in the maturity of the city’s street trees.

The trees average about 2 feet around their trunks in Savannah, while most cities see more like 14-inch average girth on canopy trees, Haws said.

Diversity of those trees is a newer concern. In 1987, a tree survey showed that more than half the urban forest was made up of only five species. Since then there’s been a greater emphasis on getting more species planted.

The arboreteum provides an educational component geared to that diversity.

“This is a place where you can walk around and in half an hour point out 50-some species of trees,” said Houston, whose organization already sponsors popular tree walks in the park. “It’s wonderful.”